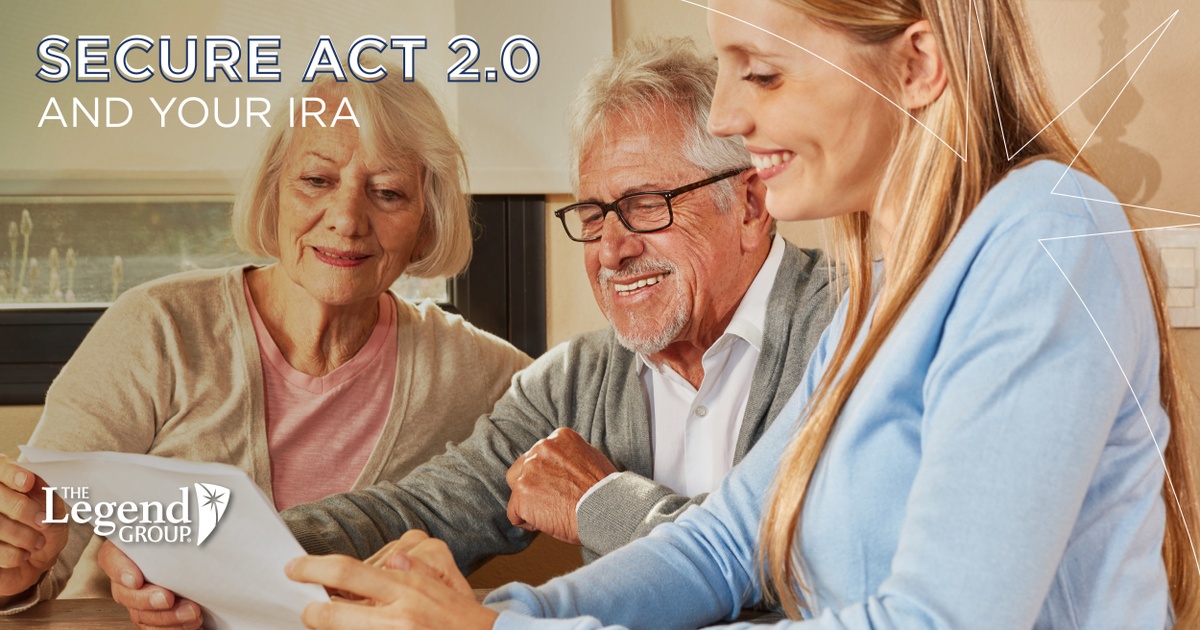 SECURE Act 2.0 and Your IRA

Here’s some of what the proposed law could change about your retirement account.

A new law is set to change the way your retirement works for you, mostly for the better.

﻿H.R.2954, also formally known as Securing a Strong Retirement Act of 2022, is intended as a follow-up to 2019’s Setting Every Community Up for Retirement Enhancement Act, or the SECURE Act. That’s why it has the nickname SECURE 2.0.

What it’s meant to do is expand coverage and increase retirement savings. How? In many different ways — but one of the biggest has to do with RMDs.

An RMD is a required minimum distribution: the amount you must withdraw from your IRA once you reach a certain age. They’re designed so that the account will eventually run out of funds instead of racking up accumulations forever, and they’re also there so that the IRS gets its share of the savings. Money put into a retirement account is not taxed, but the money taken out of a retirement can be, depending on the situation.

Under the current law, if you skip taking your annual RMD in full (unless you’ve got what the IRS considers “a reasonable cause”), the shortfall is hit with an intimidating 50 percent excise tax.
However, under SECURE 2.0, this would be reduced to 25 percent. If the shortfall is corrected in a timely manner, the penalty would be further reduced to 10 percent.

But RMDs aren’t the only thing that SECURE 2.0 might possibly change.

Once you turn 50, you’re allowed to chip a little extra into your IRA, up to $1,000 a year. If you do, you get a tax break for that contribution, which is nice, but in addition, the payout at the end can add up more than you might expect. For an IRA yielding 4 percent annually, an additional $1,000 contribution per year starting at age 50 will compound to about $22,000 when you’re 65, and an 8 percent annual return adds up to about $30,000 extra for retirement.

Those catch-up contributions will be required to be made to Roth accounts, which means you’ll pay taxes on withdrawals when the time comes.

SECURE 2.0 will also potentially give some comfort to victims of domestic abuse. While withdrawing money from IRAs and 401(k)s before age 59½ usually comes with a 10 percent penalty (on top of regular income tax), SECURE 2.0 would waive that penalty on up to  $10,000 or 50 percent of the account balance, whichever is less, for people who can certify that they have experienced domestic abuse. Not only is the penalty waived, but the income tax on these distributions doesn’t have to be paid all at once. Instead, the tax payments can be spread over three years under the proposal. And any amounts put back into the retirement account within that three-year time span wouldn’t be taxed at all, but would instead be treated as a rollover.

What Else Is New?

In addition to the changes to IRAs, the new law — provided it passes! — will expand automatic enrollment in 401(k)s and related 403(b) and SIMPLE plans, and, for employers, will boost the startup credit, making it easier for small companies to sponsor retirement accounts. That means there are going to be a lot more employees with retirement accounts, being signed up automatically with a right to opt out, rather than having to expend effort to sign up in the first place.

If you’re one of the new breed of ultra-mobile employees who change jobs every few years, you know that tracking retirement plans can be a real headache for both you (who eventually will want your retirement money) and your past employers (who want to pay out benefits). The new bill eases the pain by instructing the Department of Labor to create a national lost-and-found database to match employees with their retirement plans online.

And as it’s set up now, SECURE 2.0 could change several other things, too. Will it become a law in its current form? Nothing is certain, in politics more than anywhere. But since H.R. 2954 had bipartisan sponsorship and passed the House 414 to 5, it seems likely to pass through the Senate later this year, hopefully without too many changes leading into the reconciliation process.

By next year, if all goes well, you should have more options for putting your IRA to work for you.

Still have questions about how this new law will affect your finances? CONTACT US today!